The Gift That Changed A Life!

Long before I became Santa, and in what now feels like another life altogether, I had a friend and a colleague at the newspaper I worked at who hated Christmas!  For my friend, Doug, the only thing he liked was the increased advertising commissions and the Christmas bonus he received.  He absolutely detested everything else about Christmas.  Thought it was all silliness and lies.

It was my favorite time of year!  I loved the reason for celebrating Christmas!  The home and hearth would be beautifully decorated, a Nativity would be prominently placed in the living room, an Advent calendar would be hung on the wall and the smell of a real pine tree brightly adorned and lit up with presents knee deep under it.  I loved all the excitement, the twinkling lights and the smells.  I would come home to a house full of excited children and my wife preparing a feast for us all to sit down and enjoy.  For snacks, she made ginger and sugar cookies right out of the oven just about all day long.

Bowls and bowls of popcorn would be popped and the children would sit down and string it to hang on the Christmas tree.  More of it was eaten than was ever hung up, but then, things are always more fun on a full stomach.

For Doug, it all changed one very cold early November evening.  I was just returning from an assignment and saw he was still at work, so I stopped by his cubical and we started talking.  Doug had just come back to the office from a meeting with Bill Anderson who owned a chain of appliance stores throughout the city.  Bill was a very wealthy man.  I also knew Bill pretty well and had great respect for him.

Doug continued his story.  A few days earlier, he had finished a meeting with a client and was heading for his parked car across the fountain plaza downtown.  As he walked, a van parked alongside the fountain caught his attention where there were about 25 homeless people gathered around the back of it.  As he passed the van, he saw three or four people at the back ladling out soup into bowls and handing it to those in line.

One of the men helping to pass out the soup was someone Doug knew.  It was Bill and he was dressed like he had just stepped out of the board room.  He had a long, camel hair Pea coat on over his suit.  Doug stopped and watched as the line dwindled down to a couple of people.  Then Bill began going around and talking to a number of the homeless as they ate.  Doug stayed in the dark shadows and watched.

Bill was talking to one of the men who was a skuzzy looking young man, dressed in very light summer shirt and shorts.  They talked for a few minutes, then Bill turned and began to walk back to the van.  Very suddenly, Bill stopped and went back to the young man.  The two of them talked for a couple more minutes before Bill took off his coat and helped the younger man to put it on.  When he was finished, Bill headed back to the van.  Doug was stunned at what he was seeing.  That coat had to have cost more than a thousand dollars.

Doug had never seen anything like it before!  Here was this wealthy businessman who had worked hard through the years building his business giving this homeless guy his very expensive coat!  The scene played over and over again in Doug's mind for a couple of days till he got up the nerve to call Bill and ask for an appointment.  He kind of expected Bill to tell him to mind his own business.

Bill welcomed Doug into his office and after dispensing with small talk, Doug told him what he had seen a couple of nights earlier.  He only had one question for Bill, "Why would you do something like that?"

Doug told me how Bill became very quiet as he told the story of what he had seen.  After Doug was finished, Bill leaned forward and began to speak:  Bill had been going down to the fountain to help feed the homeless for about a year and a half with others from his church.  That evening, he had just finished a board meeting and had to hustle to get down there in time to help.  He didn't normally go down in his suit and good coat.

Bill told how he had been attending a Bible study before on Wednesday evenings and one evening the crew invited him to tag along with them to minister to the homeless.  From that first evening, Bill found himself very humbled.  As he prayed about what he had seen, he knew he was being directed by the Lord to continue ministering to the homeless.  So he had been going out just about every Wednesday evening since and relationships with several of the men were actually growing pretty deep.

Doug continued telling his story to me.  He knew that I too was very involved in this work because I had told him about it before.

The young man Bill had given his coat to was Ron and he was only 22 years old.  He had run away from his parents home shortly before graduating high school and was living on the streets.  When Bill had seen Ron, Bill rummaged around in the van to see if there was a blanket for him (the team usually took out woolen pile blankets to give out).  Unfortunately all the blankets had been given out before Bill could put his hands on one for him.

Bill further explained to Doug that he found himself trying to avoid Ron because he knew what the Lord was leading him to do.  His coat was new and was tailored to fit, so it was quite expensive.  But it was no use, and finally Bill went over to talk to him and gave Ron his coat.  Ron was indeed dressed in summer attire and it was very cold out that November evening.

As hard as it was for Doug to understand what Bill had done, what Bill said next was the most puzzling of all.

Bill finished by telling Doug that what he had seen that evening, what Ron had received was only a small measure of what God had been working into Bill's life.  From the very first night he had gone out, the Lord was cultivating into Bill's life the very heart of God for all mankind.  And in that time, the one thing he had seen was how often the poor are very quick to embrace the love of God into their lives.  He had come to understand that living wasn't about creating an empire, but that life, real life came by knowing Jesus and learning to love others, even sometimes at great personal expense.  Bill saw that God was using this time to change him, make him more compassionate and loving toward others.  Particularly those that in the past caused him roll up his car windows at intersections or look the other way before passing one of them on the street, the outcasts of our society.

In the weeks that followed, Doug found himself profoundly impacted by what he had seen that evening and what he had been told about it.  Doug quit with the cynical and sardonic comments and actually seemed to begin to enjoy the Christmas season.  He had come to understand just what it was that made Christmas so important and why people rejoiced as they did.

Doug learned how God's gift of His Son Jesus has impacted so many lives down through the ages, people like St Nicholas, and caused them to be compassionate and to give selflessly.

I moved to a different city a few years later and have lost track of Doug (and Bill).  But every Christmas since, I remember Doug and how he was changed by witnessing the selfless giving of a beautiful coat to someone else who desperately needed it.  And I find myself rejoicing even more, because one more person has seen why Christ is so important to Christmas! 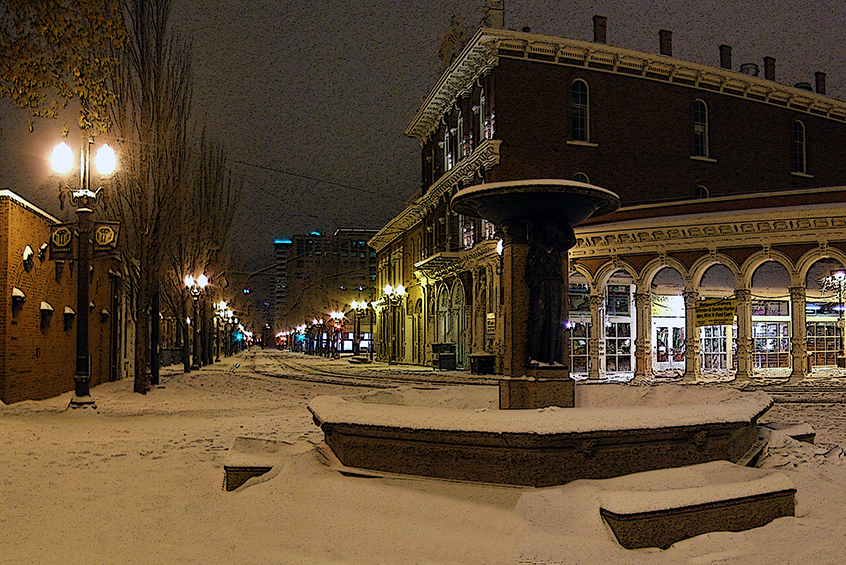