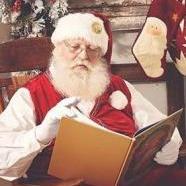 Santa Tells Kid to Lay Off the Hamburgers and Fries